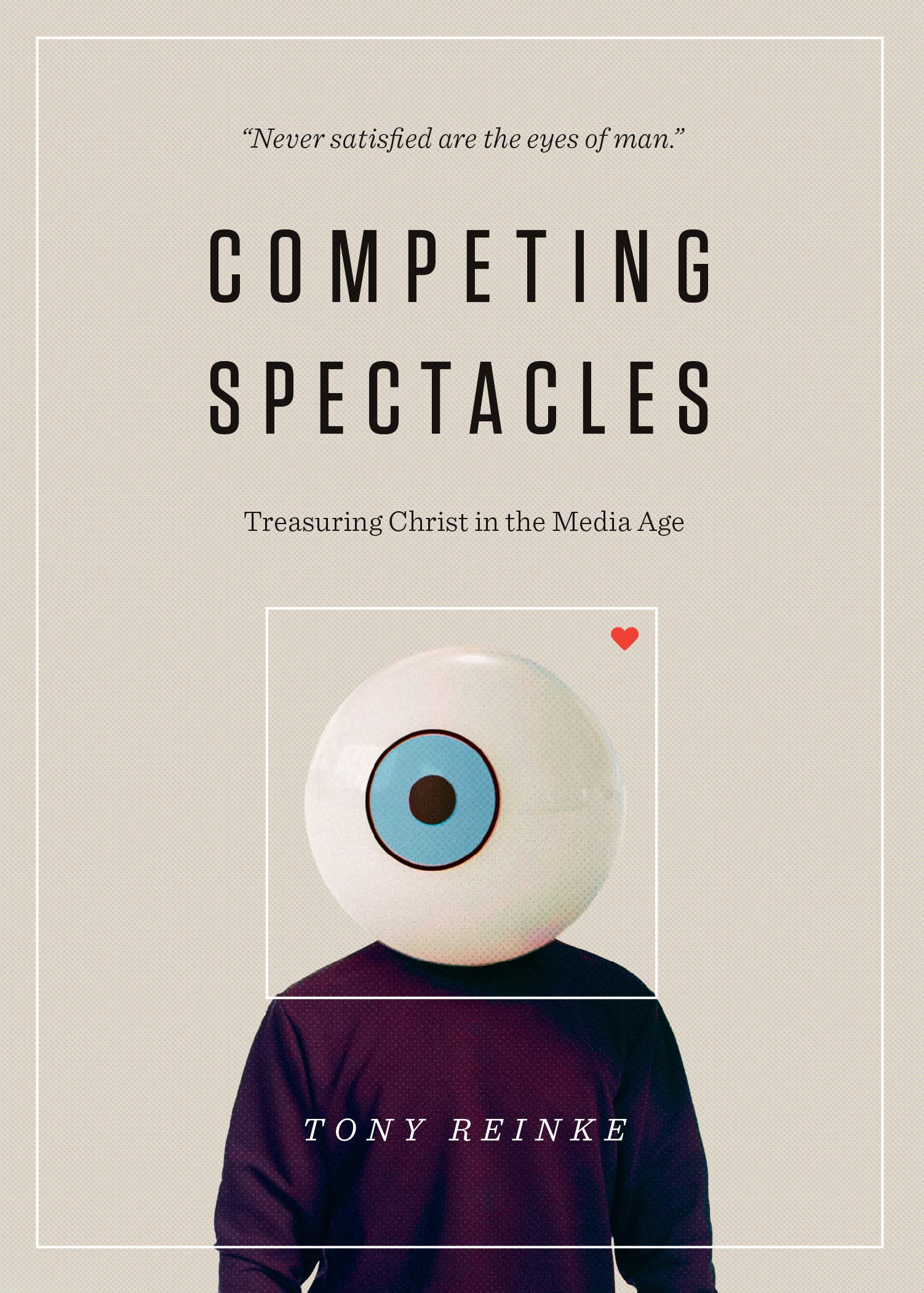 We live in an increasingly visual culture. As a pastor, I hear the relentless sound of a postmodern drumbeat: “The average person cannot sit through a forty-five-minute sermon,” I’m told. Yet that same person will sit in a dark room for nearly four hours and watch Lord of the Rings. I am convinced that

the aversion to listening to a sermon has more to do with affections than ability. That is, we are drawn to what we love. And we are increasingly captivated by the visual: screens, televisions, video games and an endless array of visual stimuli. A visual smorgasbord surrounds us and offers a rich array of pleasures and satisfaction. But do these visual delights (or spectacles) come with a hefty price tag?

Tony Reinke examines the visual dilemma in his new book, Competing Spectacles. A spectacle is anything that garners attention from the eye, be it good or evil. Reinke is chiefly concerned with answering one question: “In this ecosystem of digital pictures and fabricated sights and viral moments competing for our attention, how do we spiritually thrive?”

Anyone who thinks that Reinke is over-reacting should etch this statement on their minds and tape it to their televisions:

"The spectacle’s goal is to make spectators and to keep them spectating."

Taken from this perspective, most would agree that the goal to "keep spectators spectating" is succeeding. Our visual world is sucking people in and it appears that turning back is not an option. The net result is a people who appear satisfied but are dying on the inside.

Briefly, Reinke diagnoses the problem of spectacles and challenges readers to be aware of the ever-present tension. Indeed, the spectacles in the world lure unsuspecting eyes and promise a full array of benefits, yet in the end, is found wanting. On the other hand, the supreme Spectacle offers eternal joy and pleasure (Ps. 16:11).

But the author goes further. He argues that the supreme Spectacle is more comprehensive and enchanting than we ever dreamed: “The local church is where we go to find the Lord’s Table and baptism and the preaching of the Word, where those repeated spectacles call us again and again for a response of worship and repentance and joy.”

The Challenge of Competing Spectacles

No one can point a judgmental finger at Reinke - for he steers clear from all brands of legalism. He urges evangelical eyes to be disciplined and discerning: “Each of us must reckon with this radical eschatological promise of Christ in our personal media diets.” The challenge is to reject the profane and to “develop personal disciplines to resist the impulse to fill our lives with vain spectacles.”

The most urgent and penetrating aspect of this book concerns those who are bored with Christ and his gospel, a problem that appears to be an epidemic in this media- saturated generation. “In the digital age,” writes the author, “monotony with Christ is the chief warning signal to alert us that the spectacles of this world are suffocating our hearts from the supreme Spectacle of the universe,” Reinke adds:

"Over time, spectacles taken in unwisely will make our hearts cold, sluggish, and dull to unseen eternal delights ... Soul boredom is a great threat, and when our souls become bored, we make peace with sin."

Reinke takes a page out of the C.S. Lewis playbook: “The worst trade in the universe is playing in the shallow pools of the world’s spectacles instead of diving deep for the treasures of eternal worth.” While Lewis’s “mud pies” attract the masses, most people turn a cold should to the “offerof a holiday at the sea.”

Competing Spectacles: Treasuring Christ in the Media Age is a timely book that is thoughtprovoking and deeply challenging. Reinke’s diagnosis and description of the visual dilemma is clear and sobering. The prescription he offers is convicting and compelling. The prescription for this visual tug-o-war is nothing less than being satisfied with all that God is for us in Christ Jesus.

Competing Spectacles is a stunning book that will open many eyes. My prayer is that as the Spirit of God educates people through Reinke’s excellent work that they would, in turn, exalt the superior Spectacle, our Savior the Lord Jesus Christ. Then and only then will “the things of earth grow strangely dim in the light of his glory and grace.”