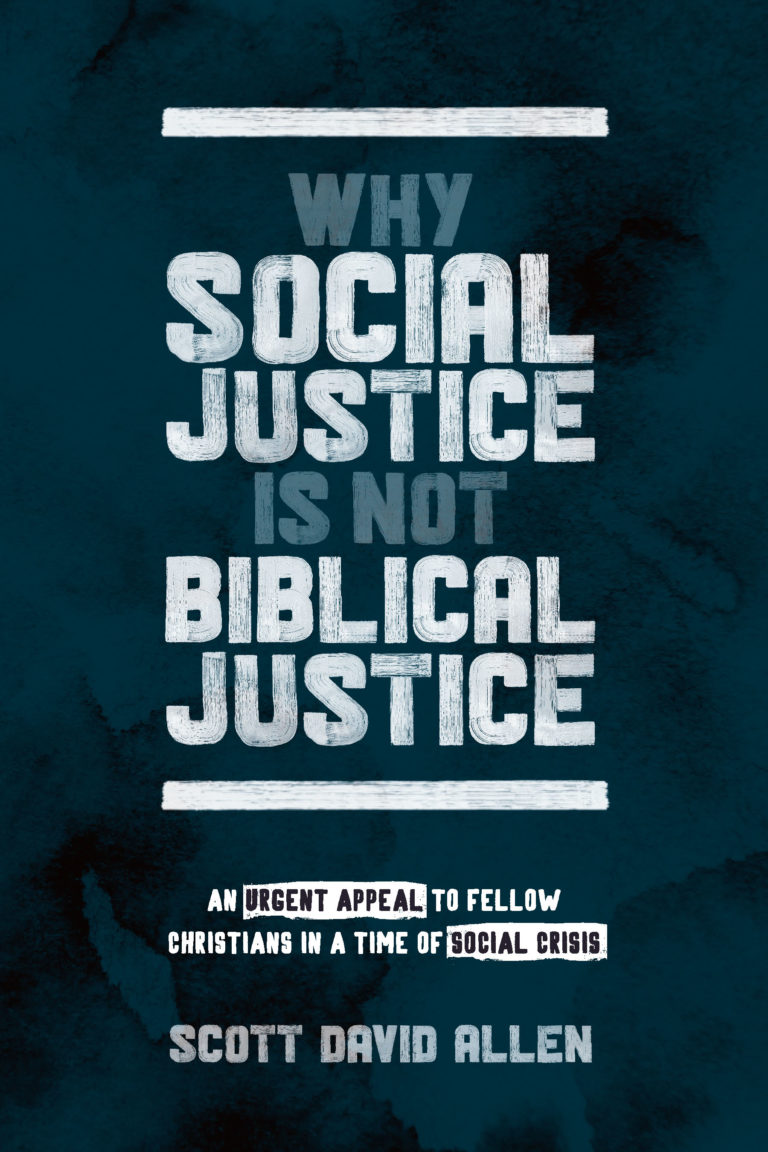 In 1969, Francis Schaeffer warned, “There’s bound to be death in the city once people turn away from the base upon which our culture was built … Death in the city will be increasingly all-consuming unless there is true reformation in the church and culture upon the foundation of God and His revelation.”[1] Fifty years later, Schaeffer’s words ring true as professing Christians succumb to the spirit of the age. One example of this is the introduction of social justice. Social justice has creeped into the church, parachurch, and the academy. The accommodation of this ideology has inflicted untold damage and is deceiving people and leading them astray.

Scott David Allen’s book, Why Social Justice is Not Biblical Justice sets the record straight. At the outset, the author contrasts biblical justice with social justice:

Biblical Justice: “Conformity to God’s moral standard as revealed in the Ten Commandments and the Royal Law: ‘love your neighbor as yourself.’”

Social Justice: “Deconstructing traditional systems and structures deemed to be oppressive, and redistributing power and resources from oppressors to their victims in the pursuit of equality of outcome.”

Careful readers will notice that the differences in these definitions are vast and wide. Biblical justice, which is an important aspect of God’s character is repeated throughout Scripture. Make no mistake: All Christians celebrate the reality of justice. The notion of social justice (what the author refers to as idealogical social justice) that many are embracing is not only unbiblical; it is anti-gospel. Scott David Allen skillfully shows why ideological social justice fails the biblical test and urges followers of Christ to steer clear from this worldly ideology.

There is much to commend in Allen’s book. The author shows the dangers of the “woke” movement, not to mention the ungodly ideology that drives critical race theory and intersectionality. These matters require a more comprehensive treatment, which are beyond the scope of this review. At the heart of the book, however, is a careful differentiation between the Revolutionary Narrative and the Preservation Narrative.

The Revolutionary Narrative embraces the notion of “white fragility,” popularized by former University of Washington professor, Robin Diangelo. The notion of “white fragility” embraces the idea that white people need to “come to terms with their whiteness.” According to Diangelo, “whiteness has given them a big leg up in life while crushing others’ dreams, that their whiteness … has shielded them from growing up as quickly as they might have done had they not so heavily leaned on it to make it through life.”[2]Thus, according to “white fragility,” all white people are racists, whether they realize it or not.

This narrative embraces the organization, Black Lives Matter, the neo-Marxist group that is growing exponentially in America. BLM is “queer affirming” and celebrates LBGTQ+ rights and seeks to abolish capitalism and replace it with a form of Marxist collectivism, not to mention the defunding of the police. The idea that America has driven by systemic racism is at the very heart of both BLM and the Revolutionary Narrative. America, in this scheme, about oppression, not freedom.

The Preservation Narrative “affirms the goodness of America’s founding principles and seeks to preserve them while desiring to continually improve our systems and institutions to more perfectly reflect these principles.” Such a view is deeply patriotic and cherished the work of the Founding Fathers, the United States Constitution, and the Bill of Rights.

In contrast to the Revolutionary Narrative, this narrative strongly emphasizes personal choice and responsibility. While racism exists and persists, it acknowledges that the ultimate evil lies in the human heart (Jer. 17:9). The author adds, “The challenges in the black community can be overcome in ways that are not dependent on the actions of white people, but the choices and actions of black people themselves.” Thus, individuals are accountable for their actions - both for good and evil.

The Preservation Narrative acknowledges America’s history of racism but also acknowledges the progress made, beginning with the abolition of slavery and racial equality. “Today,” writes Scott David Allen, “America is one of the least racist countries in the world and a land of opportunity for people of all ethnic backgrounds, which is why immigrants continue to flock here in huge numbers, including many with black and brown skin.” Racism, in this view, is condemned and justice is coveted for all peoples.

The social justice movement has skillfully and tragically redefined justice as follows:

The tearing down of traditional structures and systems deemed to be oppressive, and the redistribution of power and resources from oppressors to victims in pursuit of equality of outcome.

For Christians, it is critical that we understand the worldview shift taking place before our eyes. We have slowly moved from a Judeo-Christian worldview that provided a framework for justice and established worth among all people. “Today,” writes the author, “all this has been cast aside, as that which formerly brought order to society and meaning and purpose to the individual has been abandoned.” Ironically, then, ideological social justice does the opposite of what it sets out to do.

Ultimately, the social justice movement seeks to overthrow the Christian worldview. The author reflects on the consequences of ideological social justice: “In the zero-sum world of social justice power struggle, there is no ‘live and let live; tolerance. No win-win, or even compromise. No place for forgiveness, or grace. No ‘love your enemy.’ No ‘first get the log out of your own eye’ introspection. There is only grievance, condemnation, and retribution. Bigots, haters, and oppressors must be destroyed.” Thoughtful Christians, then, need to see through the veneer of this diabolical scheme to supplant a God-centered worldview that sees all people as image-bearers of God and bestowed with inherent worth from their Creator.

Francis Schaeffer’s admonition to aim for true reformation in the church by clinging to God’s revelation hearkens our attention back to Psalm 11:3, “If the foundations are destroyed, what can the righteous do?” Day by day the foundations are eroding as ideological social justice eats away at the fabric of God’s propositional truth. The social justice movement strikes at the very core of the gospel - and is indeed, anti-gospel.

Rod Dreher warns us in his most recent book, Live Not by Lies that the “social justice” machine is one that must be opposed at every juncture: “Far from being confined to campuses and dry intellectual journals, social justice warrior ideals are transforming elite institutions and networks of power and influence.”[3] To be clear, this movement is worming its way into the church at an alarming rate. Therefore, we must resist it with all our might and focus our attention on loving God, loving people, and working to assure that people of every color and creed are accepted and loved as image-bearers of God. We must return to the cross of Jesus where justice and mercy meet and promises eternal life to each person who trusts in an all-sufficient Savior.

Why Social Justice is Not Biblical Justice is a landmark book. It should be devoured and discussed by Christians. The net gain will be a renewed interest in biblical justice and a reinvigorated passion to reach every person with the gospel of Jesus Christ.